Scientists in New Zealand are currently working on teaching cows to go potty. And that’s no bull.

Recent studies have shown that livestock waste could lead to big, environmental issues within the country. Urine contains nitrogen, and when mixed with feces becomes ammonia, which can lead to acid rain and other problems. Not to mention it has the potential to taint water with nitrates and create nitrous oxide. Given the fact cows can pee up to 30 litres per day, some are concerned. 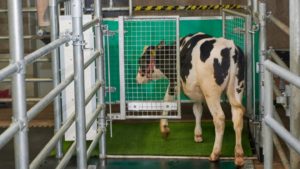 So researchers created the “MooLoo”, a designated place for the cows to relieve themselves without potential risk to the environment. For the experiment, young calves were lured into a specially designed pen and rewarded with food whenever they would go #1. Calves who would go outside of the pen would be given a quick squirt of cold water as punishment. After just over 2 weeks, it seemed as if the calves were getting the idea.

“The cows are at least as good as children, age 2 to 4 years, at least as quick,” said study senior author Lindsay Matthews.

If this new training method can be replicated on a global scale, it has the potential to greatly reduce greenhouse gas emissions.