As a way to better support physical distancing, a grocery store in Colombia has hired the goodest boy to deliver groceries to patrons.

Eros, an eight year old chocolate Lab, travels through the streets of Medellin with a straw basket in his mouth, dropping off goods to customers of the El Porvenir mini-market.

“He helps us to maintain social distancing” says Eros’ owner Maria Natividad Botero. “And people love it when we send the dog.” 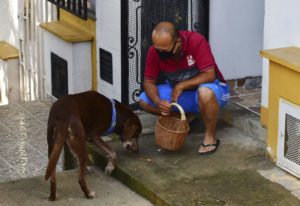 Eros doesn’t know how to read addresses, but he does have a keen memory of those who reward him with treats. This practice has caused him to travel accurately back and forth from the market after simply being told a name.

Even with Eros travelling solo around the city, his owners are not concerned with his getting stiffed on his tip.

“He’s quite a glutton” Botero said. “He won’t leave your house until you give him a treat.”